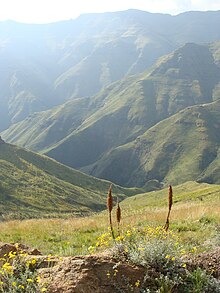 This is the largest park in Lesotho and no other place is about as far away from it all as Ts’ehlanyane.

This is the centrepiece of the Lesotho Highlands Water Project which transfers the water of the Lesotho Highlands via an incredible conduit of dams and tunnels through the mountains, eventually dispelling out onto the plains of South Africa’s Free State Province. It was touted as the biggest engineering project in the southern hemisphere in the 1990’s when it was under construction, and the sight of the massive dam wall (highest in Africa) and the deep lake it has created in the mountains is well worth beholding!!

Amazingly popular with locals and tourists alike, The Sani Pass is a remarkable area for driving, hiking or mountain biking while enjoying sprawling views of the Drakensburg Mountains. This spectacular 4×4 track twists and snakes its way through the “Ukhahlamba Drakensberg Park” up into the impenetrable rocky cliffs of Lesotho’s Roof of Africa circuit that links the spectacular scenery of the Drakensberg with the attractions of Northern Lesotho. 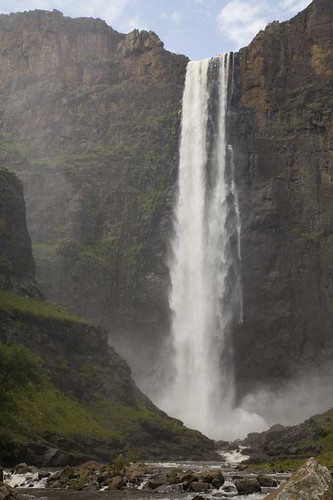 Semonkong in itself is a popular attraction, as it is home to the Semonkong Falls, also known as the Maletsunyane Falls, the highest single drop in southern Africa and offers some spectacular unspoilt scenery. This picturesque waterfall is easily accessible from Semonkong by a five-kilometre walk along the Maletsunyane River, where you will have to opportunity of witnessing the river cascade 204meters into a tranquil swimmable pool below. 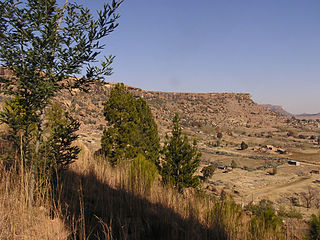 Thaba-Bosiu seen from its northern slopes

It is by far one of the most important historical sites in Lesotho and invokes a sense of identity for the proud nation Basotho.

The name mountain of the night echoed the local belief that the mountain (though not looking particularly high by day) grows by night into an impossibly tall, unconquerable mountain fortress. This explanation may be more credible than it sounds.

Good views for the surrounding countryside include those of the Qiloane pinnacle (the inspiration for the Basotho hat “Mokorotlo”), along with the remains of fortifications, Moshoeshoe’s grave, and parts of the original settlement. 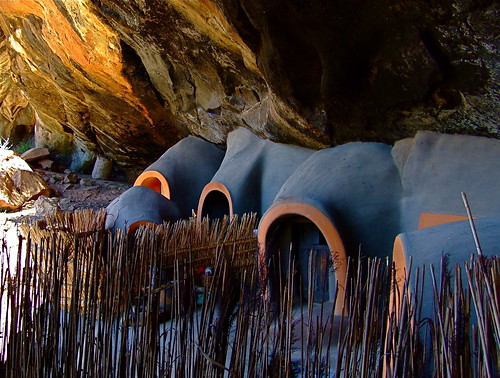 Away from anyone’s view, including that of warring tribes and the primeval cannibals that came to maraud Lesotho due to hunger in the early 19th century, is a remarkable village where cave dwellings have been carved and built under towering sandstone rocks. Almost two centuries later, these caves are still home to descendants of the original inhabitants (Basia and Bataung clans).

The site is now a National Heritage Site where visitors can learn about the rich history and culture of the people.

Step back in time as you follow the dinosaur footprints in Lesotho. This small country has the world’s largest known sites of dinosaur footprints, which makes Lesotho a favourite place for both archaeologists and palaeontologists.

The country even has a dinosaur named after it – the “Leosthosaurus” which was a 1 metre long herbivorous lizard, a very primitive ornithopod from the late Triassic and early Jurassic period 200 – 208 million years ago.

One of the hundreds of rock art galleries around Lesotho

Lesotho has hundreds of fine examples of Bushman Rock Art. Throughout the region, the San people painted the rocks until the late 19th century but are now extinct in the area.Many of the pictures have important historical information on them depicting traditions, hunting methods, etc In the Butha Buthe area (North West) there is the Liphofung Cultural Centre, where visitors can be guided through an educational centre at one of the best rock art sites available.

Major Bells Tower is situated in the town of Hlotse in the Leribe district. This is a fortress which was used during the Gun Wars of 1880-81. The Tower is still largely intact. Visitors can see an interesting primitive statue of a European in front of a nearby local administration office.

. This was the first designated National park in Lesotho. This hidden gem is full of wonderful rock formations unique to this area, massive rock overhangs, small lakes, rock art, rock arches and a beautiful and unique ecosystem of plants, birds and animals.

The Prime Minister of Lesotho at the time, Chief Leabua Jonathan, loved trout fishing and, since the dams and rivers are a fisherman’s paradise, this may explain the park’s existence.

This site uses Akismet to reduce spam. Learn how your comment data is processed.